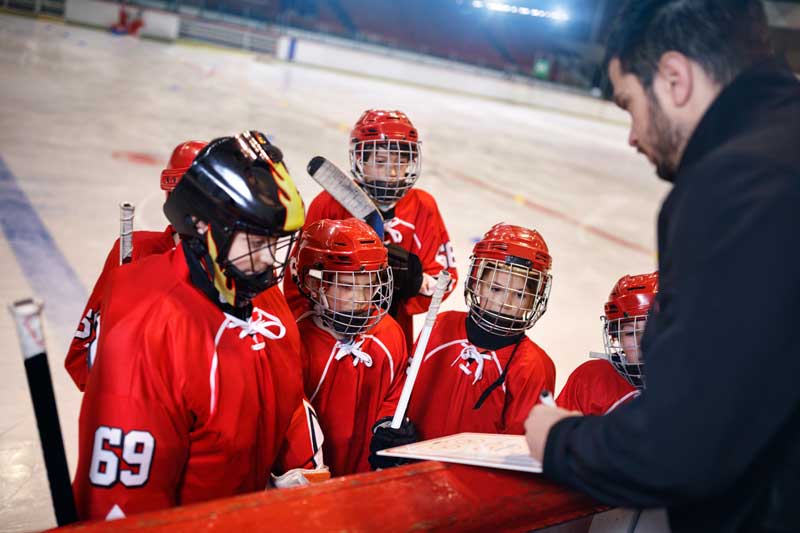 Have you been wondering how you can become a better, more effective hockey coach? How you can get more out of ALL of your players?

The position of a coach can be one of the most important authority positions that a young person will encounter. As a coach, you have a powerful opportunity to influence them…if you choose to use it wisely. On thing that effective coaches seem to have in common is the ability to continually look within and ask themselves "How can I be a better coach?"

That authority figure power is often under estimated by coaches. It is important to understand that athletes, especially younger ones, take the words that coaches use seriously, often literally and to heart.

Now teenagers tend to have a thicker skin than an 8 year old, but even so, I have helped many athletes in youth sports clear out interference patterns and the resulting fear that originated from the thoughtless comments of a coach. The most effective coaches understand that developing mental toughness is not about berating, being hard on or embarrassing their athletes. That actually does the opposite and destroys mental toughness.

Every coach wants to win, in fact that is the goal every time a coach, player or team plays a game. I think every coach should hold on to that desire. What is often overlooked however is that many coaches risk throwing away tons of talent and in turn harming their own success and goals, such as winning, solely because of their coaching style.

What Can I Do To Become A Better Hockey Coach?

This is the formula that all of my mental toughness programs are built on to create peak performances in athletes and coaches. Thats right!! I teach mental toughness to coaches wanting to positively impact their players and teams. We can all agree that an athlete’s performance can really only be as good as their potential (their ability/skill), correct? Interference is a summation of all of the things such as negative self-talk, doubt and fear that takes away from an athlete’s potential, which in turn results in decreased performance like poor desisions, chokes, scared to take the shot, not playing aggressively...

Fear is by far the biggest source of interference that prevents an athlete from achieving success, developing mental toughness and truly having a peak performance. To be more specific, one of the most common fears tends to be fear of disappointing their coach, parents or teammates. Coaches and even parents need to protect young athletes from creating this fear. If parents and coaches want to get the most out of their young athletes, they need to realize that they can’t all be treated the same. You can’t treat every individual exactly the same, expect them all to rise up, succeed and give their best with a narrow style of coaching.

Many coaches and parents adopt the philosophy of “Well this worked for me growing up so it should work for my players or my child.” Coaches can also get hung up on the attitude of “I was a successful athlete in my time by doing it THIS way and it worked great for me. Therefore, everyone should fall in line-do things my way or the highway”.

Both of these attitudes may have been a good match for themselves or those particular athletes. However, it could be a complete mismatched style for their child or the athletes they are currently coaching.

Always remember this: Every athlete is a unique individual.

Sports create a unique environment for studying and influencing performance.  In business or the corporate world when you want to get 100% effort and commitment from employees, you need to find out what motivates each individual employee. By paying attention to how they work, what makes them tick, you nurture that, grow it, capitalize on it to motivate all your employees to be successful. Athletes in sport are no different.

In contrast, coaches, especially at high levels of competition, are often extremely rigid in their coaching styles because, in their mind, there is no shortage of players out there trying their hardest to take the place of the current starting players. The attitude is that there is a never-ending line up of players waiting to fill positions vacated by players who just “can’t hack it.”

I guess my point here is that many coaches will throw away as much talent, if not more talent, than they actually develop with a one-size-fits-all coaching mentality. Look at all of the athletes that have been let go by coaches only to become some of the best players to ever play the sport.

You can become a better coach and could be so much more effective by understanding the psychology of what makes each individual player tick. Highly successful coaches such as Scotty Bowman, Darryl Sutter and Brian Murray come to mind. These coaches had the ability to take any player and guide them to their best. Become a better hockey coach, build better hockey players.

Back to how a coach impacts youth athletes. If you were to take 100 youth athletes and ask them to tell you some things they remember a coach having said to them, at least half would remember a coach saying something that really hurt them at the time. Many of those athletes carry around the detrimental effects of that for a long time. In fact, many adults can still recall things that a coach said to them.

Even things that adults think would be minor or said with the intentions to inspire or motivate a kid are really taken to heart, especially the younger ones.

Coaches, everyone is working hard out there and there will be some that work harder than others. Every coach teaches the values of hard work, that’s a given. Now here is a secret for you. If you really want the winning edge, remember it exists in the minds of your athletes, not yours. If you want to build a successful, mentally tough team, one that you can count on for peak performances, it’s your job to find it in each one of your athletes and do all you can to inspire it. Don’t get stuck thinking you have the perfect winning formula, training sessions, athletic development strategy, even if you think you had it last year. Be flexible, positively impact and inspire your athletes on an individual basis. Continue to learn, especially about mental toughness and work on your own professional development as a coach. You will quickly see how it can give both you and your entire team that winning edge and competitive advantage. Better hockey coaching builds better hockey players.

Get Your FREE Mental Toughness Consultation